BBQ at Laurence and Suzanne’s 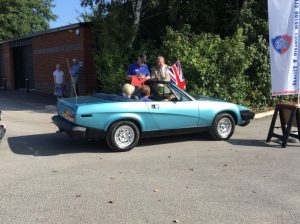 This event had been suggested by Laurence and Suzanne Holt and gratefully accepted by the group! 16 cars assembled at the Hog’s Back services on the A31 near Farnham for a run through very scenic parts of West Surrey, taking in Hindhead and Haslemere before pausing for tea, coffee and biscuits at the Bat and Ball pub near Wisborough Green.

Having prised members out from their comfortable seats at the pub, it was time for Part 2 of the run, taking in Cranleigh and Normandy before arriving at Laurence and Suzanne’s magnificent country retreat near Pirbright. Everyone was amazed to see the preparation they had done for us and Laurence was already tending the three barbecues they had laid on to cope with so many visitors – there was even a disco set-up which played suitable background music and came in very useful when the pop trivia quiz was produced! One table scored a staggering 54 points in this challenging quiz!

After devouring a superb BBQ and selection of Laurence’s home-made desserts, Suzanne took orders for tea and coffee before inviting people to meet her three horses; others had a sneak preview of Laurence’s latest project – a metallic green TR7 FHC but with a huge Webasto roof. Surely another IWE prizewinner!

Everyone was staggered at the preparation work Laurence and Suzanne had obviously put into this outstanding hospitality (not forgetting the run itself) and sincere thanks to them for a most enjoyable and memorable event. The weather was kind to us so it was soft tops down throughout.