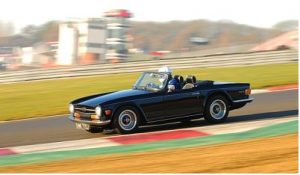 On 05 June WFTR were invited to participate in a Brands Hatch Taster event organised by the South Downs Group.  Originally we had two cars going, but this reduced to one in the form of Andy Page in his TR4A for the actual event.  He joined other participating members of the Register for the event which was extremely well organised. There was a mix of other classic cars to make up the numbers for the session booked. Being an open track day, after a briefing, they had a 20 minute slot so they were not on the track at the same time as the modern cars, BMW, Mercedes, Golf GT, Porches etc. This was Andy’s first experience on a track and he did find it a bit hairy especially at Paddock Bend, but was really pleased he did it (another thing to cross off his bucket list!).  Modern cars have a track time of about 1.00 minute and he managed 1.27, which is not bad on the tyres he ran on. Many thanks to Peter and Steve of South Downs Group for a memorable event.