Long Weekend in the Cotswolds

by Barry on 6 Sep 19 in All WFTR Galleries, Reports 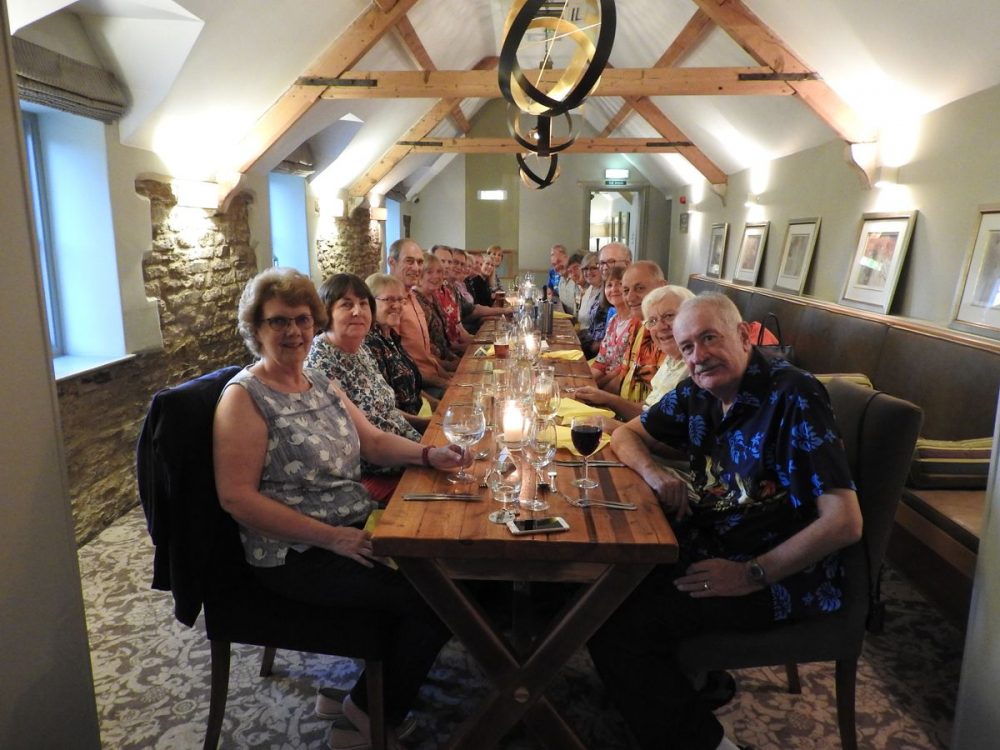 Friday
Eleven of the twelve cars left Chievely for a cross country run to Batsford Arboretum, the venue for our lunch time stop and despite a bit of confusion when a road closure caused us to detour, everyone managed to get back on route and arrived at almost the same time. A leisurely lunch in the Garden Centre was followed by a visit to the Falconry Centre where we were treated to an interesting (and often amusing) display and a chance to see the many birds living at the Centre. Lynda was delighted to see so many owls and took the opportunity, along with Helen and Suzanne, to ‘make like a tree’ during the display.
En route to the hotel some took the opportunity to visit the bustling market town of Stow-on-the Wold while others chose to stop in picturesque Bibury, but all arrived in good time to ‘dress for dinner’ and to meet up with Steve and Chris who had arrived in their TR6.

Friday night was ‘naff shirt’ night and all were invited to wear something in that theme, thanks Steve for a great idea (see photos). It was extremely funny when Cliff, Barry & Terry arrived in almost identical shirts – what it says about their fashion sense I will leave you to decide. Because we were lucky enough to have a private dining room and adjoining lounge we were able to have a couple of after dinner games without embarrassing ourselves in front of other guests. The first challenge was to build a tower from spaghetti, sticky tape & string with a marshmallow on the top, and after a lot of laughter and rule bending, but I am glad to say no acts of sabotage, Tim & Avis, Steve & Chris were declared the winners. The second challenge was to fold and launch a paper aeroplane, sadly the plane that flew the furthest was disqualified for the use of unauthorised materials and Laurence was declared the winner.

Saturday
After breakfast we set out for Cleeve Hill for coffee at the Golf Club and some spectacular views over Cheltenham , the River Seven and into Wales to the west and to the north over Winchcombe. We then continued on to the Broadway Tower Country Park where we could climb the Tower (more views), visit the cafe and shop, or take the countryside trail. There is also a Nuclear Bunker on site and a lot of us chose to take the tour which included a very interesting talk, a descent through a manhole cover and down a 20ft ladder into the bunker itself which was very much as it was when last in use.

We returned to the hotel in time to meet up with the visiting cars from Camb Followers and Glavon groups who were also in the area and had been invited to an informal gathering at our hotel. In all we had a total of 32 TR’s a Stag and a Jensen and it was great to spend time chatting and exchanging stories in the sunshine before they headed back to their respective homes or hotels.

The after dinner entertainment for Saturday was a quiz and everyone contributed to the questions. Barry and I were last but I still think the owner of that horse was Eric Clapton!! First prize went to Terry and Helen – there is a pattern emerging here! Geoff, Lesley & Tim and The Holts were 1st & second runners up.

Sunday
It was a bit of a chilly start but we set of in bright sunshine for another run which would take us eventually to Bourton-on–the-Water a very well known and popular tourist spot but with plenty to keep us busy for the rest of the morning before meeting up again at The Mousetrap for Sunday Lunch. Sadly it was then time for home so we said our goodbyes and went our separate ways but it was a very memorable weekend with great company and we enjoyed it immensely.